Always fashionable, not to mention lovely as can be (you’ll see), Geri of Because I’m Addicted and co-founder of new LA coffee shop, Neighborhood, is nine months pregnant with her second. And, a lot’s happened with this blogger slash entrepreneur and HATCH alum since we last chatted.
Now, at the tale of her second go-around, we played dress-up with this drop-dead gorgeous mama as she gears up to release her new clean beauty brand, Saie plus birth a baby — no biggie!

Here, she dishes on the surprise of getting pregnant while breastfeeding, the difficult decision to work on launching a business (similar to a baby) while growing a baby and having a baby, plus how she plans to honor her fourth trimester. @gerihirsch

How have you been feeling?

Not that great. I have a sense I may go into labor early! Definitely, need to pack my hospital bag today, in case it’s go-time.

Recently, I’ve been having a lot of pelvic floor and ligament pain. The baby is sitting low, and she’s already 7 pounds! She’s huge, and I still have three weeks left! Seeing as I’m not exactly a “big person,” I’ve been incredibly uncomfortable.

I had my 37-week ultrasound last week, and I told the technician that I thought this baby was bigger than Leo. She brushed me off, saying that “everyone” feels that way with their second, but, usually it’s not the case, and only appears that way because of muscle memory. Then, she measured the baby and was like, “Oh no! This baby is much bigger!” I knew it! Literally, I feel like I’m sharing my body with a toddler. Wow, have you done anything differently?

No, I haven’t. If anything, I would have thought that this baby would be smaller because I have a 19-month-old toddler I’m running afterplus a business we’re about to launch. Some days I can hardly remember if I ate!

I hear that! Speaking of, how has this pregnancy been different from the last?

Mainly I feel like I blacked out most of the first one, and now that I’m doing it again, I’m like, “Oh shit, I forgot about all of this! But now I remember!”

That said, from what I do recall, the second has been different. When I was pregnant with Leo, I was hyper concerned with the details like having “my daily bone broth” and all the things. Now, I feel more relaxed and less mindful because I’m so busy. Any cravings this time or last?

It’s funny I just had my first pregnancy craving EVER. I’ve oddly been wanting dairy, like greek yogurt, granola, and chia seeds to be specific. I had never experienced “a craving” before this, but there’s no better way to describe it outside of primal. It wasn’t so much as “I want to taste this,” and more as if my body truly NEEDED the calcium or protein urgently at that moment!

We intentionally tried to get pregnant as we want our kids to be close in age. I was still breastfeeding Leo when I got pregnant this time and was super surprised! I didn’t even know this was possible, but my period came back just as she started eating solids and was consuming less milk. Honestly, I didn’t know this was humanly possible until I was there. I breastfed Leo until she was about 17 months and was pregnant for 4-5 of those months. I remember thinking about the amount of life I was sustaining and being in awe of my body. Looking back, it was insane. Unfortunately, it took a toll on me. Giving Leo the nutrients she needed plus everything the baby needed, left me depleted and exhausted on the daily. At some point, I decided something had to give, and the only thing that could give was breastfeeding. SO, we had a serious conversation, and I told Leo that she had to be a big girl and stop breastfeeding. She was mad at me for a few days and then was over it, and stopped. At that point, we were weaned to nights and mornings, so went down to mornings, and a few days after, stopped altogether.

And, did that make a difference? 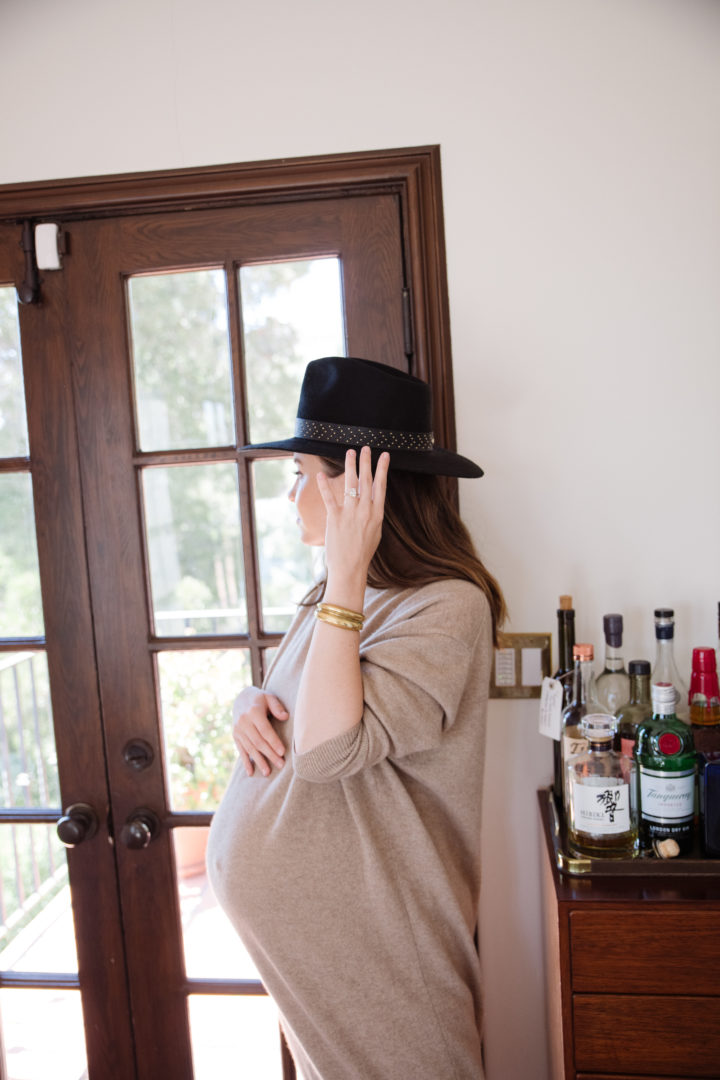 Have you been working out?

I have been, although not as much now that I’m 38 weeks. I continued until I was about 30 weeks with a trainer and then started doing Amanda Kloots videos from home. She teaches fitness dance classes and recently had a baby. When she was super pregnant, she made a series of workout videos that have become my go-to this trimester. Plus, I do yoga with my doula.

Ideally, we’re going to have a drug-free birth at the hospital. I had this with Leo, so I know it’s possible, but I am trying to be zen about the whole thing and not have any expectations. We’ll see how it goes. Have you decided on a name?

Names are tricky! Every kid in LA has a name that’s wilder than the next — no basic names here. I never liked my name growing up. But now I feel indifferent about it. We have some options but haven’t fully decided yet. We named Leo after the sheriff that saved my husband’s life before she was born. SO, we have a lot to live up to in the name department which makes it difficult to name our next child something arbitrary simply because we like it versus something with merit. We want her to feel like her name is meaningful, too, and has real weight.

On working throughout the pregnancy?

During my first year of motherhood, I took a big step back from work. By choice, I didn’t have a nanny and was extremely happy. Then just as I got pregnant with my second, an incredible opportunity came my way with Laney Crowell of The Moment (also a HATCH mama)— she had this idea to start a non-toxic make-up line with a luxury experience. In her past life, she worked at Estee Lauder and was teaming up with two women (both from Estee Lauder), including a top formulator for a number of the Lauder brands. I had always wanted to start a line, but I also know what it takes to launch a business, and I don’t have the appetite to do that alone at this stage of my life. Therefore, when Laney asked me to help her, I couldn’t pass up the chance to build something powerful with this epic team.

Saie! We’re launching with mascara, brow gel, lip balm, and eyelash curler. It’s super clean with an elevated experience in application, performance, and experience. When you take it out of your make-up bag, we want you to have that same je ne sai qua that you have with your favorite toxic products. I still use make-up that’s not clean because I’m not willing to compromise on the experience and application. My skincare and body care are 100 percent pure, but I cannot give up my Nars Creamy Concealer until something clean comes along that’s as good and gives me the same joy — we plan to change that.

You would never look at our line and think that it’s clean. We don’t even use ethanol, which most clean brands still do! It will likely be one of those controversial ingredients you’re going to start hearing about like sulfates and parabens. We don’t use any petroleum-derived products either! It’s as clean as you can get. How do you divide your time and energy?

We’re launching in November, and it’s been all hands on deck as of late. For the past six or seven months, Saie has taken up all of my time. But, we’re close and as tight as the timing is (see pending baby :), it’s going to be great. While we’re launching with four products to start, we have the next year and a half worth developed, so we’re in good shape; which gives me a little bit of breathing room for when I’m on house arrest and completely MIA.

Initially deciding to join Saie was a challenge for me as I didn’t want to compromise my family. But we came up with an agreement that worked for us, which feels balanced. Plus, Laney, the founder, is also a mom and understands how I feel about motherhood — I want to be there for my kids and not miss a beat. I intend to ramp up when they start school. So far, I feel I can accomplish everything I need to work-wise (thank goodness for working remotely) and still be a great mom, given the structure of our agreement.

How will you approach your fourth trimester and maternity leave?

Beyond the first 40 days, I don’t know, but I do know that I’m planning to honor my fourth trimester. I’m going to work with my doula, Stephanie Matthias @radiantwoman_ as I want to give myself the time to heal and be still. Last time, I found the fourth trimester to be a tender time. My focus will be resting, bonding, and eating certain foods to help with my supplies — both milk and energy — to nurture my body and baby after birth. The right diet makes all the difference. Plus, I’ll probably do some Ayurvedic massages and meditations. Any wellness hacks you’ve leaned on?

Not sure if this is considered a traditional “hack,” but I’ve taken a considerable step back from all social obligations and been extremely mindful of how much I CAN do. As of late, my priority has been growing this baby, working on our business, and my toddler. It’s hard because I want to go out and support friends, but I can’t do it this time. My dream scenario is to be in bed by 7:45 pm every night — not kidding.

What music will you play during delivery?

I’ve been doing a deep dive into my music and trying to figure it out. I’m feeling something powerful, maybe Sade, and I think there needs to be some dirty ATL rap in the mix too! At some point during my last labor, I needed some intense dance routine moments, like Beyonce!

It’s so hard as every situation is so specific. I remember when I had Leo and chose to take time to focus on her, I feared my career would suffer and not come back. Then, this incredible opportunity came about, and now my career is something completely different! I’ve learned to listen to my needs, know that things change & evolve, and honor the time I have with Leo (and soon my new baby). The truth is, the career will always be there, but you won’t get time back with your children.

I don’t want to open my eyes one day with a great job and kids in high school that don’t want to hang out with me. The reality is, they’re not always going to be in my bed, or I’m not going to get them from their crib in the morning to feed them. I want to soak in and savor all of these fantastic experiences that only happen in this finite time of early parenting. Media Star Natalie Manuel Lee On raising the next generation.