Dynamic, spirited, and as authentic as they come, this actress, fitness guru, and doula gives it to us straight.

Pregnant with her second child, after healing from a miscarriage, we caught up with this real-deal mama in LA to chat letting go of mom-guilt, and advocating for others.

Physically, strong and healthy. Emotionally, however, I’ve been all over the place between the hormones and healing from a miscarriage.

When I was pregnant with Samuel, I was starring in a play, teaching fewer fitness classes, and working out less. Whereas with this baby, acting has been on hold with COVID, and I’ve been focused on teaching for MIRROR, plus chasing after a two-year-old all day. Moving more has really made a difference; I’ve gained less weight and have not been constipated.

What was your miscarriage experience?

November 16th 2019, life was booming. Newly pregnant with our second, I booked my first pilot, and MIRROR was opening in LA, everything was coming together. The night after Samuel’s 2nd birthday party, I flew to LA for the launch party of MIRROR. When we landed, I received a call that the pilot was canceled. Devastated by this news, I headed to Century City mall for some retail therapy. While I was there, I went to the bathroom, turned around to flush, and saw blood. With my pants at my knees, I called my midwife sobbing that it was all my fault because I had lifted luggage and was stressed with work. She told me to stop blaming myself, because there was nothing I could do to change the outcome. Afterward, I called every doctor in LA for an appointment. Shockingly no office could see me for two days even though I was actively miscarrying! In The meantime, I called my girlfriend, who’s had several miscarriages and she told me not to use a tampon, pads only!

That night, I went to MIRROR party. Distracted and worried, the night was a blur, full of influencers and selfies. I still couldn’t believe that I’d lost my pilot and my baby in a matter of hours.

On Wednesday, I went to UCLA for the ultrasound, and the doctor confirmed I’d lost the baby. I called my husband crying before heading back to the hotel to hole up in the dark and wallow in my sadness. After an hour of that, I snapped out of it and decided I wasn’t going to feel sorry for myself. Instead, I drove to my fave restaurant, ordered some rose, and tried to process all that had happened.

How did you begin the healing process?

The night I got home from the launch event, I posted a pre-party picture from my bathroom. Despite everything, my curls were popping, and I looked good. Working from the outside in, I gave myself a pep talk and posted the picture for work. When I started to receive comments like, “you look more beautiful than ever,” my heart broke; I was saddened by the fallacy of it all. That night, I had to post an image as part of my work agreement. I wasn’t trying to poster or appear as if my life is flawless in any way. It made me sad to think that someone could see my post and assume everything was perfect in my world when in reality I was having a miscarriage. The next day, I posted a follow-up photo with a caption about how things are not always as they seem on Instagram. I didn’t give specifics but cautioned not to compare our lives to these little squares because there’s more to every story.

The first seven days after my miscarriage was the hardest; I was an emotional wreck. My hormones were all over the place, I was depressed and my hair was falling out in clumps. Slowly but surely, I began to pull myself together and got back to life as a mom, actor, and fitness instructor. Then, unexpectedly on New Year’s Eve, we got pregnant again!

Pregnancy after a miscarriage?

Finding out you’re pregnant after such a traumatic loss is emotionally conflicting. I didn’t know whether to be happy or scared. With my first, we tried to get pregnant, but my second and third pregnancies happened by chance. I was nervous as I couldn’t figure out how I was going to manage filming the pilot in Mexico, working with MIRROR, and a new baby. I felt that if people knew I was having another baby, I’d miss out on work opportunities, so I hid the pregnancy for professional reasons.

When I got pregnant with this one, I hid it again, but for different reasons. I felt I had burdened everyone with my miscarriage, so to protect myself (in case I miscarried again), I kept this pregnancy under wraps. I was emotionally disconnected from the entire experience and didn’t go public with the news until 20 weeks.

Being pregnant through Corona?

During the early months of quarantine we temporarily moved out west and I had to change doctors twice from NYC to Oakland to LA. It was challenging to cope with all of the uncertainty, not to mention living with my parents for the first three and a half months. Once we settled into our own place in LA, and I confirmed the midwives at UCLA, my stress level dropped.  Serendipitously, UCLA is where I miscarried; it’s healing to know that I’m going to have my little boy there. I had a fantastic experience with midwives in NYC at Central Park Midwifery and Lindsey Bliss, a doula from Carriage House, and am hoping for a similar experience with this baby.

How do you incorporate your son into your daily routine?

I’ve invited him into my life, not the other way around. He’s learning to cook, take the trash out, pick up after himself, and get his snacks. Doing things for himself cultivates independence and confidence. And selfishly, this way, I’m not catering to his every whim.

Life as a working mom?

Being a mom is important to me, but it’s only a part of who I am, not all of who I am. I’ve never had guilt for working and thrive when all of my pieces are in play. Flexing my creative muscle makes me a better version of myself. When Samuel was a baby, he came to Princeton and Chicago, for plays and back to NYC with me for my Off-Broadway performance. I nursed him backstage and gave him pumped bottles, we made it work.

Those early days of becoming a mom taught me to let go of all my preconceived notions. We live in a world where everyone is curating perfect Instagram lives. Even if we rationally know it’s fake, we subconsciously compare ourselves to these false standards, and it’s total BS. For example, I thought to be a good mom, I had to make all of Samuel’s baby food from scratch. When I couldn’t do that because of work and travel, I was down on myself unnecessarily! I’ve learned to be gentle and flexible through the parenting process.

How did you get into fitness and the birth space?

Years ago, I watched the business of being born and became passionate about the birth space. When I got into fitness, women came to me with questions after they had their babies, and I didn’t have the tools to help them during this super vulnerable time in their lives. This led me to become a doula so I could better show up for my community.

Over time pre and postnatal fitness became my niche. Moms said that I was paying attention to them in ways no other instructor ever had. Now with MIRROR, I’m filming four to five times a week from home and motivating an entire community of moms. In fact I get daily DMs from women around the country saying that moving their body with my classes via MIRROR has saved them mentally during this time. Recently this inspired me to start a page @mirror_mamas to encourage women to move their bodies for as little as 15 minutes a day. Doing this affects everything from the inside out.

How are you raising your boys these days?

I’m outspoken about everything because it’s all connected from sizism to racism and economic inequality. Calling out bullshit and having the hard talks will allow us all to live more authentically. The race conversation can be overwhelming but life and motherhood can be too, so we might as well make the changes and get on with it. We have to speak up for what’s right and create solutions together.

Be honest with your kids and incorporate them in the conversation from race to COVID. As a society, we often don’t include our children in the tough talks but they’re more capable of understanding than we give them credit for. As a mother of Black boys, I will teach my sons to advocate for all people, Black or not. If your kids see someone being mistreated, teach them to stand up.

How do you take time for yourself?

Recently I watched Michelle Obama’s Becoming and there’s a scene where she describes resenting Obama for going to the gym when she was at home with the kids. Then, it dawned on her that it wasn’t his fault that she didn’t go to the gym, it was hers. If he could do it, so could she. So, she organized childcare and started working out again. Don’t blame others for what you’re not doing. Instead, speak up, and get on with it because the truth is, taking care of yourself is essential. It’s not about looking good for a man, it’s about feeling good for yourself. I learned this from my mom. She always said, taking care of herself was not for my dad but rather was for herself. Having a kid is no excuse to start looking like a hot mess. If you feel good, you will show up in the world as your best self. It’s that simple.

Go easy on yourself. We all have an idea about what motherhood should be or what we want it to be, and then life happens, and things change. Maybe you want to breastfeed, but you have to go to work and need to use formula. Or, perhaps you’re a single mom with a nanny and that wasn’t part of your original plan. Instead of attacking yourself, be flexible and let go of the fear and expectations. Also share your story with other women so we can work together to normalize the many paths of motherhood. Meg Stratchan, Founder Of Dorsey, On Her Life-Altering Journey To Becoming A Mom Plus Taking Pregnancy One Day At A Time 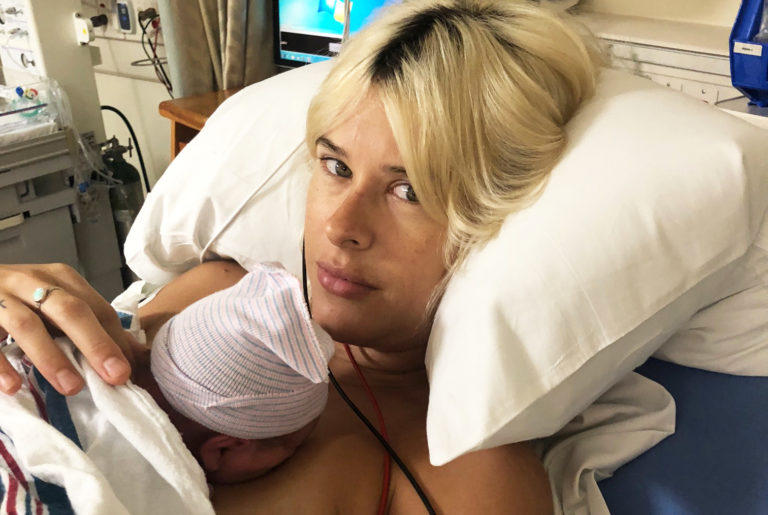