Mama, meditator, & mindful mover, Melissa, is as bright and radiant as they come! Herein she shares her top preggo-wellness tips, the importance of being gentle on your body (and mind), and why she’s learned to let go of birth plans. @melissawoodhealth

I feel good, except it suddenly dawned on me that I’m about to have a baby! This pregnancy has been particularly challenging. I’ve felt worse than I’ve ever felt for most of it (nauseous, vomiting, and depressed) and entirely outside of myself. Plus, I couldn’t be present with my son Benjamin — I’m at a complete loss as to how people manage to be pregnant with a toddler. However, I got through it, and one day I woke up and the sickness had subsided — I have so much energy now! What is your birth plan?

When I was pregnant with Benjamin, my only plan was epidural or no epidural. I wanted a natural birth but felt that if I needed an epidural, I would potentially get one. And, that was that. At no point in that “plan,” did I EVER consider that I would have a C-section — it simply didn’t enter my mind! Well, I had a C-section. After 26 grueling hours of labor with no progression, while Benjamin’s heart rate continued to drop, there was no other option, and I was devastated. I couldn’t believe it. I thought I’d be the last person in the world to have a C-section — whatever that means! It was tough for me to come to terms with, mainly because it’s perceived as such a negative thing by society. The reaction that I’d get from people after the fact was, “OH, geez. Bummer.” However, thank goodness there are C-sections otherwise a lot of babies and mamas wouldn’t be here!

Therefore, my plan this time is either, natural, epidural, OR C-section. We’ll go to the hospital after my water breaks, and I’ll give it all I got, but if it doesn’t happen naturally, then the safest thing for me to do is get a C-section, as my scar could rupture. I have such a different mindset now. I’m planning to go with the flow and I’m putting the whole thing in God’s hands. My priority is that my baby and I are safe, no matter how she comes. I feel better knowing this, but it doesn’t mean I’m not scared. I’m terrified to do it again. It’s almost scarier the second time as you know too much. I was so naive the first time, and that was utter bliss.

I’m still working out and grateful that my body has kept up with me! My workouts haven’t changed much from my non-pregnant workouts — other than avoiding the traditional abdominal exercises. During my second trimester, I did a pre and post-natal pilates certification course taught by an incredible woman who encouraged easy and thoughtful conditioning of our bodies. Her teachings have helped me tremendously as I feel amazing and haven’t had any injuries throughout this pregnancy. Whereas with Benjamin I was doing much more aggressive workouts — before I created my method — and was injured multiple times.

All of my workouts are on my website: www.melissawoodhealth.com, plus we’re launching a full pre and post-natal workout series shortly. Of which, the prenatal series will closely mimic the postnatal series, because after giving birth you’ll want to continue to take it easy on your body. How has this pregnancy differed from the first?

For starters, I didn’t have a toddler when I was pregnant with Benjamin. Therefore, I was able to focus on genuinely taking care of myself during that special time.

Also, with Benjamin, I was extremely nauseous, but rarely actually sick. Whereas with this pregnancy, I’ve been endlessly queasy and ill. Overall this go-around has been MUCH harder.

During my first pregnancy, I was only at the beginning of my plant-based vegan journey, and towards the end of the nine months, I craved meat.

However, this time, perhaps because I’ve been vegan longer, I haven’t had any weird cravings. When I was very sick, my doctor suggested that I try eating animal protein as it would give me more substance and help with the vomiting. I was desperate at that point and willing to try anything (literally anything) to feel better! Therefore, I made eggs a few times but immediately got sick. I also took a bite of Noah’s turkey & cheese sandwich (out of desperation on a flight), but then got sick. At some point, I gave up the notion that animal protein would help and accepted the fact that some women have sensitive pregnancies and I’d have to sit tight and wait it out.

What’s a typical day of eating for you?

My eating habits are not too far off from how I typically eat in my “non-pregnant life,” except that I eat a bit more.

I have pure celery juice first thing in the morning on an empty stomach — I’ve been doing this for about three weeks and have never felt better. I’ve had celery juice for years mixed with other vegetables, but there’s something to be said about having it alone. Honestly, I was wary of jumping on this band-wagon as it’s such a “health” trend and I tend to be cautious about food trends. However, the benefits are incredible! It’s opened up this whole new energy level in me.

About 30 minutes after my celery juice, I have a massive bowl of pineapple, nectarines, and raspberries, followed by two slices of avocado toast with sea salt, nutritional yeast, and lemon. 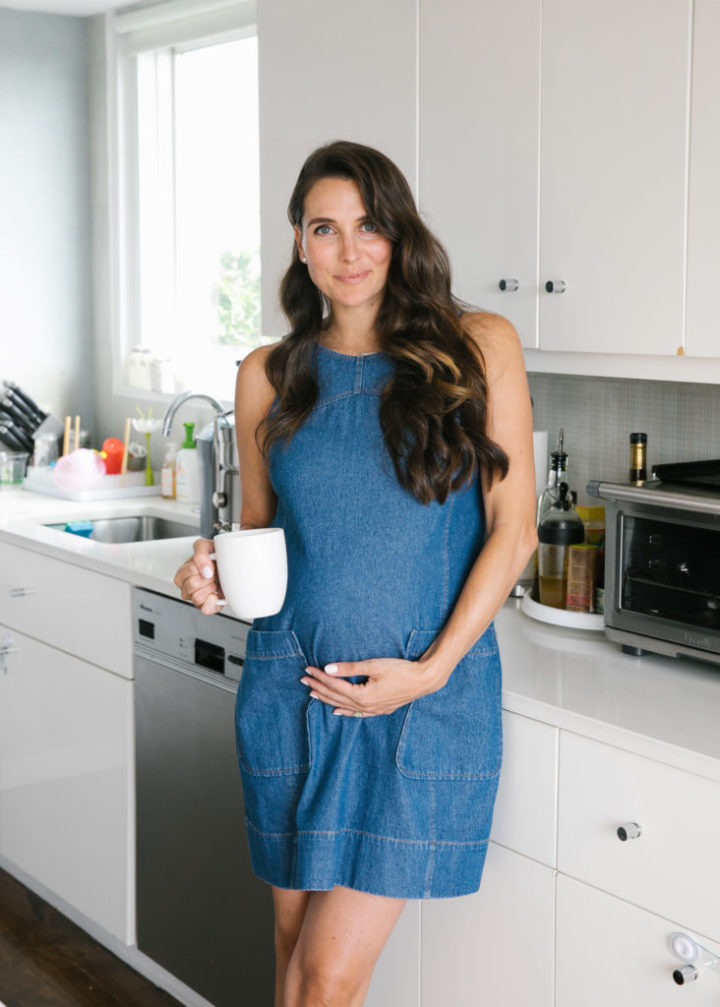 For lunch, I typically have a large salad with kale, cucumber, tomatoes, more avocado with lemon, apple cider vinegar, and olive oil dressing. I’ll pair the mixture with a veggie burger with Veganese, lettuce, avocado, and Ezekiel bread (I’ve been much hungrier these days). I either have plant-based burgers like the Omni burger or a veggie burger by Dr.Preggers — I find the veggie burger gives me that added substance my body needs while pregnant.

I generally don’t eat between lunch and dinner as I’m not a snacker, but if I were to have a snack, I’d have a coconut yogurt with cashews or a green juice.

For dinner, I’ll make a sauté with mushrooms, kale, and brown rice with a touch of olive oil, nutritional yeast, and lemon. I love rice; I’m a big believer in carbs. Our bodies consist of carbs, and we need them for our energy levels to thrive. I can’t imagine life without them.

Truthfully, I’m not craving anything as I allow myself to eat nutrient-dense foods and therefore my body is satisfied. What are your go-to wellness hacks for pregnancy?

So many! Mainly, I’ve done a lymphatic drainage massage once a week throughout my entire pregnancy, and I can’t recommend it enough. It’s eased any swelling that I may have had and helped with excess water weight on the body. With Benjamin, I had cellulite all over my body, whereas with this pregnancy, it’s considerably less — all in part from my method, eating habits, and lymphatic drainage massages. I’ve had cellulite since I was 16 (my mom and sister have it too) but compared to my first pregnancy it’s night and day.

I dry brush at least five days a week. I’m a big believer in this too, especially for women that swell as it helps release toxins from the body. Plus, I regularly do a facial massage with my fingers, and this has helped me avoid pregnancy face! I’m doing a video soon — stay tuned!

Plus, I have a daily meditation ritual which is my saving grace. My practice is 20 min first thing every morning, and I read A Course In Miracles throughout the day.

Are you avoiding the traditional don’t-eat-while-pregnant foods?

It changed this time, unfortunately. Sorry, husband! I’ve had a low libido and no desire — I was sick for most of it and my belly’s so big. It was different the first time for sure as I was still going strong until the end. Oh well, soon enough!

Are you planning to take maternity leave?

I’m sure I’ll take a couple of weeks (or a bit more), but I’m excited to get back to all the things that have been pending throughout this pregnancy. I’ve been working hard on rebuilding the format of the workouts based on feedback from my subscribers and looking forward to all that’s coming work-wise post-pregnancy.

Pregnancy is such a sensitive stage in a woman’s life, so you have to do what makes you feel the best. It’s easy to look at these women, especially on Instagram, which seem like pregnancy doesn’t touch them — they’re not sick, and you’re like “WTF are they doing that I’m not?” But, you can’t compare your journey with anyone else’s. Experiment with what works for you. I never thought that celery juice would be this transformative, but guess what, it is! I wish I had done it my whole pregnancy. Be easy and gentle with yourself, your body, and your mind. Especially your workouts during this time. Plus, meditate, meditate, meditate! Don’t neglect your meditation practice. Kimmi Chex The new mom sets a new back-to-work tone at the NFL. Katy Tur on her postpartum journey, the state of the news and what's next.