With November 3rd on the horizon and our attention fixed firmly on the election, we’re spotlighting this powerhouse mama who has become the “publicist for voting.”

Brilliant activist, immigrant, and mom of two, Mandana is the co-founder of I am a voter and the co-host of The Dissenters podcast. In full marathon mode in the lead up to the election, Mandana talks to Babe about creating a cultural shift around voting, raising kiddos that care, starting I am a voter while on maternity leave, and harnessing the collective power of moms. And, why the most important thing you can do right now is VOTE!

The ah-ha moment to launch I am a voter?

America saved my life. We immigrated to the US from Iran as religious refugees when I was six years old and I was raised to believe this is the greatest nation in the world. It’s frustrating to see how immigrants are portrayed in media when so often, we’re the most patriotic people. I’ll forever be grateful for what America offered our family; we would never have the freedoms that we have here, back home. As a result, I’ve been fascinated with politics since I was a kid. My dream job was to become a senator, and while I didn’t know what that meant at the time, I knew I wanted to be involved in government.

I never did become a senator, but my career has taken several twists and turns that ultimately led me to start I am a voter. Trained as a lawyer, I got an education in entrepreneurship from Rachel Zoe, working across many verticals from media to impact and fashion. After Rachel Zoe, I went to work at a tech company to build its consumer-facing teams. During my time there, I had my second daughter and went on maternity leave.

So, here I am, at home with a baby, watching endless news. With toxic rhetoric on all sides, I was utterly overwhelmed by how divided we were as a nation, and couldn’t understand how we got to such a place. Still, on maternity leave, I began exploring ways I could help change the conversation. I reached out to a few senators and congressmen that I’d met over the years to get a better sense of the situation. They all said the same thing: to create lasting, systemic change, we must increase voter turnout. What? Who wasn’t voting? I was shocked! I couldn’t believe people would electively forgo their right to vote. As an immigrant, naturally, I assumed everyone was voting because it’s a privilege to do so.

Blown away by the numbers, I learned that 100 million eligible voters didn’t vote in the last presidential election. That said, we don’t do a great job of teaching civics in school and haven’t culturally prioritized or promoted voting since Rock The Vote launched in the 90s. It was clear we needed to change the messaging around voting. Immediately I emailed 25 women I’d worked with throughout my career to “rebrand” voting, and, silly as it sounds, we banded together to act as voting’s “publicist.” Merging our collective resources in entertainment, fashion, and PR, we set out to reshape the way society thinks about civic engagement and participation. Remaining nonpartisan, we aspire to give people the tools, resources, and facts (in a fun, straightforward way) to become well-informed, enthusiastic voters. We want everyone to understand the importance of participation across all levels and ultimately engage in every election (local and federal), not just the big ones.

Tips for teaching the younger generations about voting?

Between social media, household conversations, and what is happening on the streets, it seems kids are more exposed to what is happening politically than we were as kids. Therefore, it’s our responsibility to educate them to use their voices and advocate for what they want both for themselves and others.

As for voting, I explain to my kids there will be choices in life, and if they want a say in the outcome, they have to speak up. I relate this concept to ordinary decisions like “Vanilla or chocolate ice cream?” or, “Where should we go for dinner or on vacation?” If you don’t vote, you have zero chance of getting the flavor you want or going to the restaurant you like. Whereas if you speak up and participate, while there’s no guarantees you’ll get your way, it certainly gives you a better chance.

In addition to voting, I tell my kids that being an activist can be as simple as standing up for someone else or challenging the status quo when something doesn’t feel right. If they see kids hurt, alone, or sad at school, they must help out and be kind. If we all acted from a place of empathy and compassion, the world would be a very different place. Activism is simply fighting for the betterment of someone else.

The same goes for wearing masks right now; we wear masks to save other people, and in my mind, it’s the same concept as voting. It’s all interrelated. Yes, we vote to defend our values and ideologies, but we also vote for everyone who can’t vote and our children’s future.

Between I am a voter, The Dissenters, and motherhood, my hands are full; none of which would be possible without the tremendous support of my family. I’m incredibly lucky to have my family live within walking distance of our house, plus my husband is a champ, and I have an unbelievable nanny.

At the beginning of lockdown, everything felt insurmountable. No one knew what would happen, whether or not we would have an election, or whether our kids would ever attend school again. The uncertainty of it all felt much heavier than it does now (thankfully). Overall, I waver between tremendous gratitude and immense grief. While the past six months has been heartbreaking worldwide, I’m grateful to have this time at home with my kids. I worked way too much before, and so did my husband. Being able to sit together every day for lunch and dinner has been such a gift.

Through this pandemic, I’ve come to understand the value of time differently. The other day, I said to a friend, “I can’t believe I used to get on a plane to go to London just for a meeting!” In hindsight this seems so insane. I feel like we were all in this habit of saying yes to everything and now I’m finally learning to create boundaries. Although, these days, I’m not going to lie, all bets are off and the boundary situation is pretty much nonexistent. I’m working an obscene amount leading up to the election but this is a very specific moment in time.

How did The Dissenters come to be?

Initially, we wanted to create a platform to honor 20 “Dissenters” a year that are changing the world or showing up for others in different ways. To close our first season we’re ending with Hilary Clinton as our finale guest, which is epic!

Over the year, we’ve highlighted a phenomenal range of change-makers, some with prominent names and others with less, all from different spaces, including fashion, LGBQ rights, gun rights, and animal rescue. The diverse curation of conversations is meant to showcase activism at every level. Interestingly, most of our Dissenters never set out with the intention to change the world, but instead, they saw something so grossly unjust they were moved to do something about it. For example, Shannon Watts, my mentor and founder of Moms Demand Action, is a total badass, and the NRA’s number one enemy (which makes her the coolest woman in the world). Her story, a stay-at-home mom of five who unexpectedly started the most massive grassroots movement in our history, began after Sandy Hook. Outraged and gutted, she decided to take a stand and has made an earth-shifting difference: The NRA is the weakest it’s ever been, and Moms Demand Action can outspend them in just about every way. What started as a small action on her part has proven the power of community by harnessing the strength of moms to get shit done. As a friend and a participant, it’s been beautiful to watch. More importantly, it serves as a reminder of what we can accomplish together.

Also (selfishly), Deborah, and I just really wanted to meet these people! They’re our heroes too, and we have looked up to so many of them for so long. Sitting in on a Zoom with Jane Fonda was a major life bucket experience. Honestly, I can’t express how proud I am to have been able to share the stories we have with our community.

Reading or listening to these day?

What can I say, reading for leisure is not really a thing for me right now. Although I do manage to listen to The Daily podcast regularly and my friend Sophia Bush’s podcast In Progress. She is the greatest human of all time and I could listen to her speak for hours. Plus, she is massively responsible for the success of I am a voter and an integral part of our founding story; I don’t think we would be where we are without her. Other than that, right now, I am solely watching and reading the news…as you would imagine.

Any advice or ways to get involved?

The most important thing people can do as it relates to civic engagement is vote. Second to that everyone should use our text platform to stay current. Text the word “voter” to 26797 to confirm you’re registered and receive voting reminders per state, local, and federal elections. You can find out your polling location and what you need to bring with you. Or, if you want to vote by mail, you can request your mail-in ballot. Everything you need will be available to you via this nonpartisan text platform with zero promotional texts and only the information you need; it’s the best way to stay engaged. Trust.

“We’re teaching our kids there will be choices in your life, and if you want a say in the outcome, you have to speak up.”

Gail Simmons On Smart Food Choices And Trusting Your Instincts. 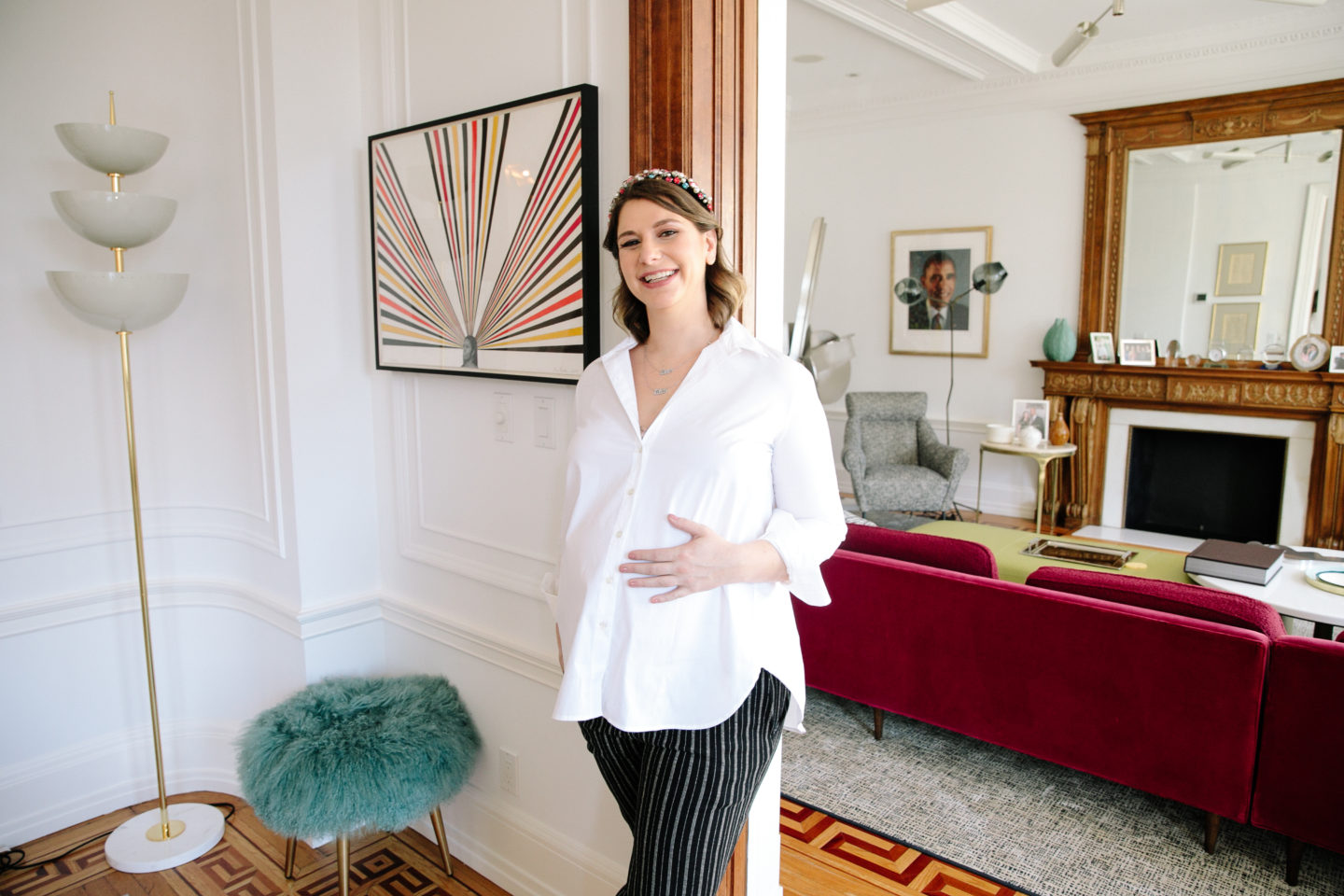